The Physics of Photography

Since the 19th century, photography has been an essential part of society, allowing us to document our memories and history. But how does photography work? The concept of photography is largely based on one of the most important principles of physics--the way light works. Using the properties of light, developers of cameras were able to create one of the most revolutionary devices in history--the camera. The camera utilizes lenses and mirrors to create an image which is then recorded on light-sensitive film, which can later be processed to obtain photographs. Even today, in the digital age, cameras still use the principles of light that they have been based on for more than 100 years.

How a Camera Works

How a camera works. As shown, a camera uses lenses (most use a combination of many lenses, this one has been simplified) to direct the light to form an image on the film, which is then recorded.

Camera lenses use the basic properties of light to project real images onto film. A camera will always contain at least one converging lens, in order to project a clear, defined image. Also, "zoom" on cameras is merely increasing the magnification (ratio of image height to object height) of the image, by varying the spacing between lens elements. Different focal lengths of cameras specify how much you can magnify an image, and what will be in focus. Camera lenses use complex combinations of many different lenses, but the concept is the same as for two lenses. The image from the first lens becomes the object on the next lens, and so on and so forth, until the final image is projected onto the film.  Some lenses (called "reflex" lenses) have mirrors incorporated into them as well.The reasons why cameras have so many different lenses built in is to correct for errors such as chromatic aberrations and other issues that will affect the focusing of the image. To see the difference, compare the images from pinhole cameras (on the other page) and the pictures from a normal camera-- the pinhole camera, with only one "lens", has distortion of the image. The reason why most cameras (any type) have multiple lenses is to correct these errors and others.
Different types of lenses have different focal length ranges. For instance, a 50mm lens has a focal length of 50 mm, and is typically used on cameras with 35mm film size for a "normal" view. Telephoto lenses (as shown in the picture), have a longer focal length, to allow for zooming. However, this also corresponds to a shallow depth of field--the more you zoom in, the smaller your picture gets. Wide angle lenses, in comparison, have a deep depth of field and much of the scene is in the picture.

Ray diagrams outlining the concept of zoom lenses. As you can see, changing the distance between the lens elements changes the focal point of the image, changing the magnification, which is what allows it to "zoom."

Lens elements in cameras.
Shown here are the various arrangements of lens elements in typical camera lenses. As you can see, they all have multiple elements, and are made up of different shapes of lenses to get the best quality images. However, we can simplify these calculations  with the simple lens equation: 1/di +1/do=1/f. We can use this to calculate the distance to the image for any lens (typically the focal length and the distance to the object will be known), just remember that it has to be used for each lens element. To simplify these calculations, we can just do a two lens problem. Imagine that there are two converging lenses as part of a camera. We can use the basic lens equation to calculate the distance to the image for the first lens. Then, we apply this to the second lens, but this time, the "object" is actually the image from the first lens. To get the total distance to image, add the two image distances. This concept can be applied to as many lenses, and thus, it is possible to calculate image distance for a complete camera lens. (Note: A camera can be made with no or few lenses at all--see pinhole camera, however, in reality, most cameras nowadays have multiple lenses). 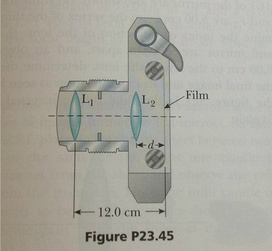 Chromatic aberration is caused by the different wavelengths (and thus, focal lengths) of the different colors of light. This causes some parts of the image to be blurred, as seen on the right.

Left: Different types of camera filters. Right: A picture, taken with a polarizing filter (right) and without (left).
A polarizing filter, used both in color and black and white photography, can be used to darken overly light skies and improve the quality of images. Because the clouds are relatively unchanged, the contrast between the clouds and the sky is increased. This happens because of the phenomena of polarization. Some of the movement of light is blocked by using a polarizer. There are also other colors of filters, such as red and violet, that block certain wavelengths of light from passing through, creating different effects in photos. This happens because the color subtraction of light--some colors (wavelengths) are able to pass through, while others are blocked, creating different appearances of the image.
Website created by Chandra Couzens and Christine Vo
AP Physics B/ Period 4
June 2013
Powered by